From Hesitation to Admiration

Is Guadalajara the Next Big Winter Circuit Destination? 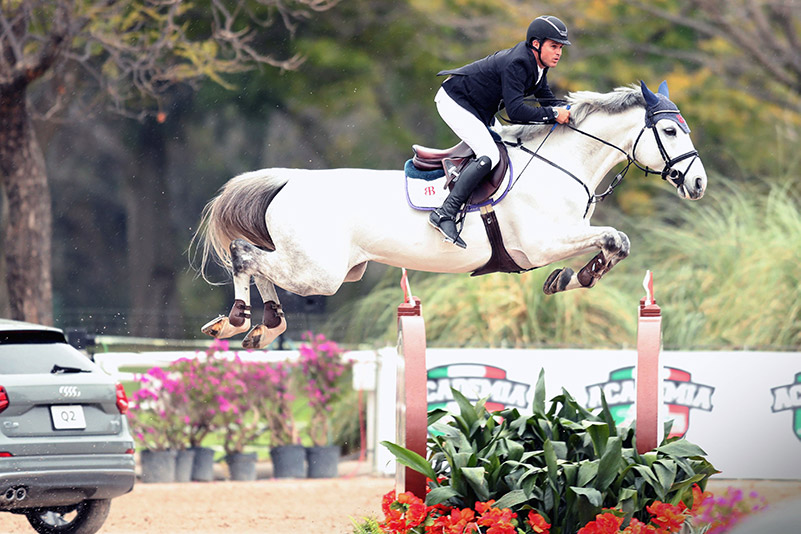 Triple Copa Scappino, produced by eq MKTG Mexico, is the 11th stop on the North American League Tour. With riders seeking to land an invitation to the Longines FEI World Cup™ Jumping Finals in Paris, as well as those looking to compete in a superior sport setting, this late January opportunity is ideal. As a person who wears many hats – hunter-jumper competitor, tack store owner, press release producer and disc jockey – Lexie Looker had an opportunity to experience the magic of Mexico firsthand when asked to join the EqSol Team south of the border. This is her story.

Last December I opened my cell phone during a break from class and saw a text message from Jackie McFarland, owner of EqSol. “Can you give me a call this afternoon? I have an exciting opportunity that you may be interested in.”

I had been dabbling with helping at EqSol, mostly assisting with PR at the Blenheim EquiSports shows, including at The Las Vegas National. So I was curious what was in store. “Sure,” I responded, “I’ll call you in ten.”

“Hey Lexie, thanks for calling. How would you feel about joining me on a trip to the FEI North American League event in Guadalajara, Mexico, next January?” 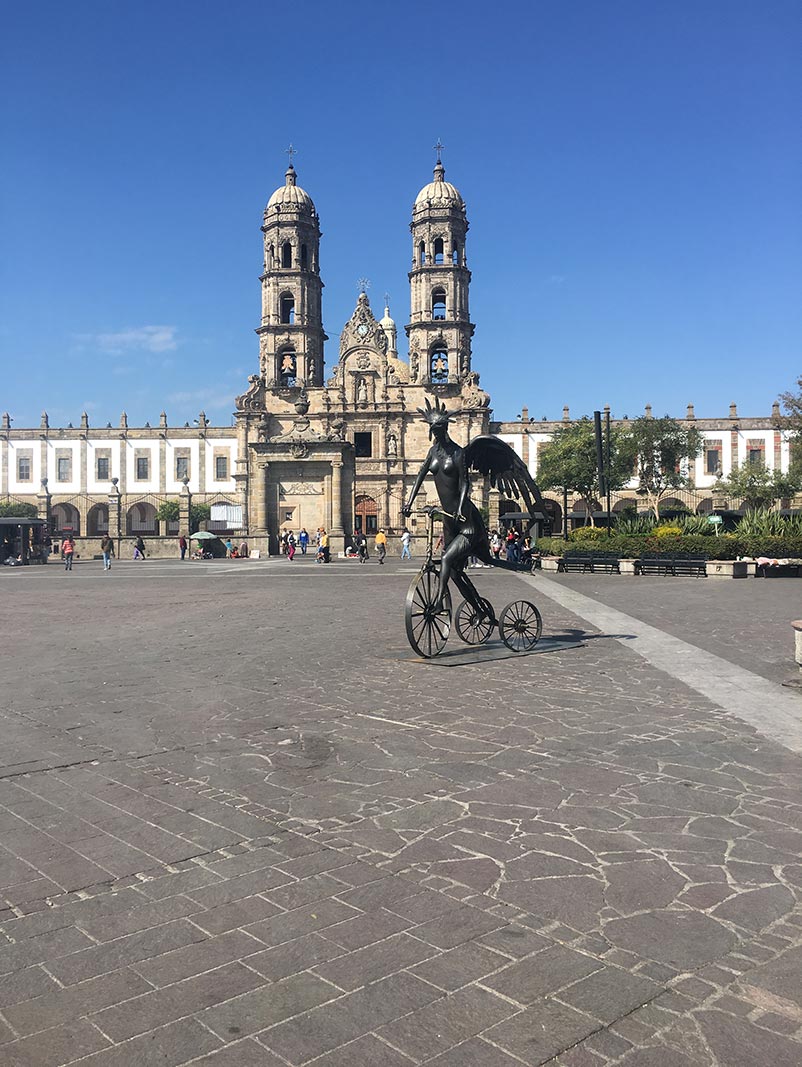 “Ok, that sounds great!” I said, trying my best not to sound hesitant, “Can I bring my mom with me?”

“Yes, your mom can definitely join us. I’ll keep you updated with more info as it gets closer.”

“Wonderful. I’ll talk to you later,” I ended the call and took a deep breath, wondering what exactly I had just gotten myself, and my mom, into.

As much as I love working with EqSol, seeing top sport and exploring new places, Mexico has a stigma that concerned me. Was it worth it to take a risk?

Leading up to the trip, I was bombarded with news stories about the dangers of Mexico, the terrorism that went on there, and what would happen to me and other Americans if I went. Both my mom and I were more than concerned and we weren’t certain what to do. Our departure was less than two weeks away and we were leaning towards staying home. So just a few days from our flight, I sent Jackie a text to ask her if I would be safe there. Being the supportive boss that she is, she said that if I felt hesitant or nervous, I should not feel obligated to go. She had been several times, alone, and wasn’t worried – not any more than in any other big city in a foreign country. I appreciated her message, and actually did feel I had made a commitment. So my mom and I got our passports, packed light and prepared for the unknown wilds south of the border. 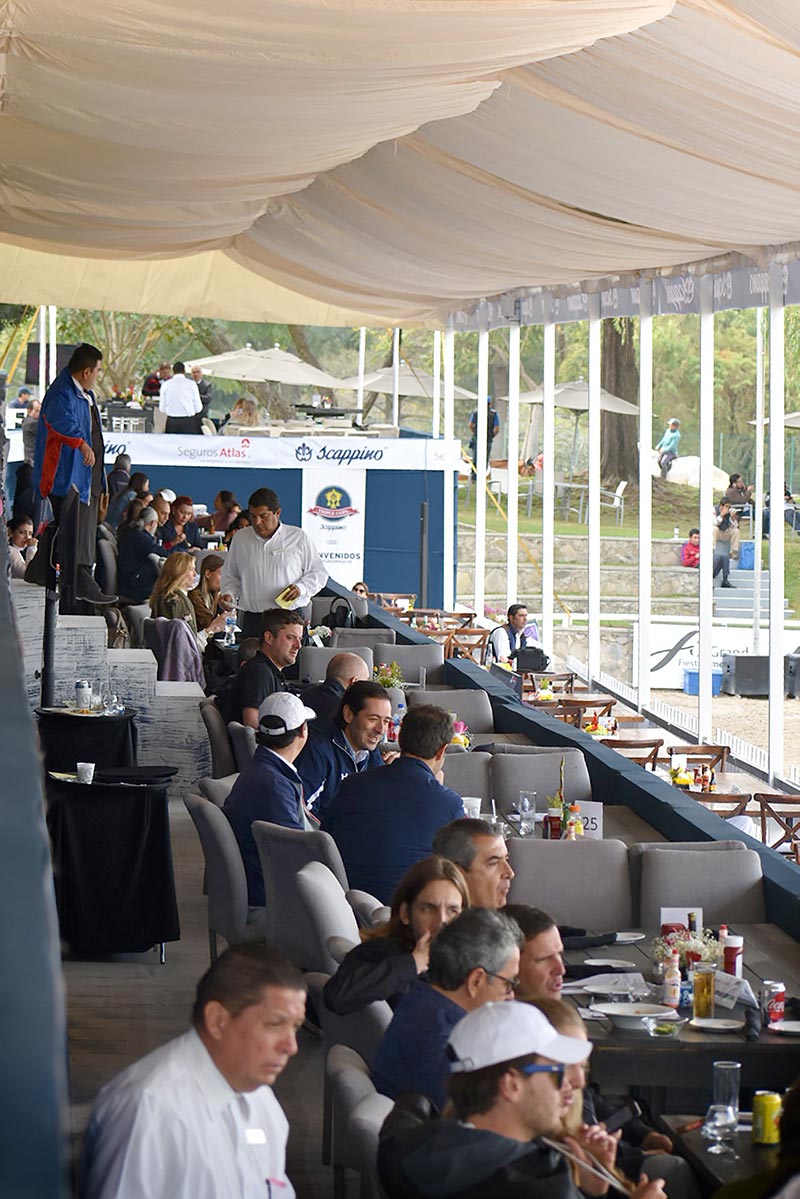 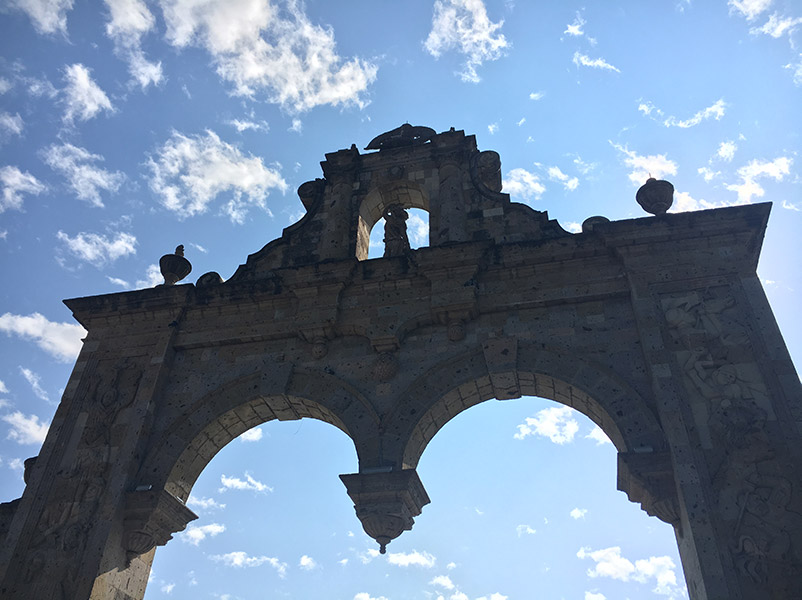 When the airplane landed at the Guadalajara Airport, I smiled at my mom to reassure us both, grabbed my carry-on from the overhead bin, and off we went. After a driver holding a Longines/FEI sign picked us up, it was about a 30 minute ride to the Grand Fiesta Americana. I opened the car door and found myself at a beautiful and welcoming place where the staff were helpful and caring. After putting our bags in the hotel room, my mom and I decided we should head over to the horse show to see what the venue was like. So I checked in with Jackie.

“Hey, we’re at the hotel right now. Can we meet you at the horse show?”

“Yeah, that sounds great. There’s a 1.40m class going right now, so walk on over and I’ll meet you by the side gate of the Guadalajara Country Club.”

She went on to explain that GPS will send me to the front entrance and that we should continue around to the right for the side entrance. I tried to sound calm on the line. “We should walk there?”

“Ok, see you soon,” I said trying not to sound nervous and still wondering what exactly I had gotten into. 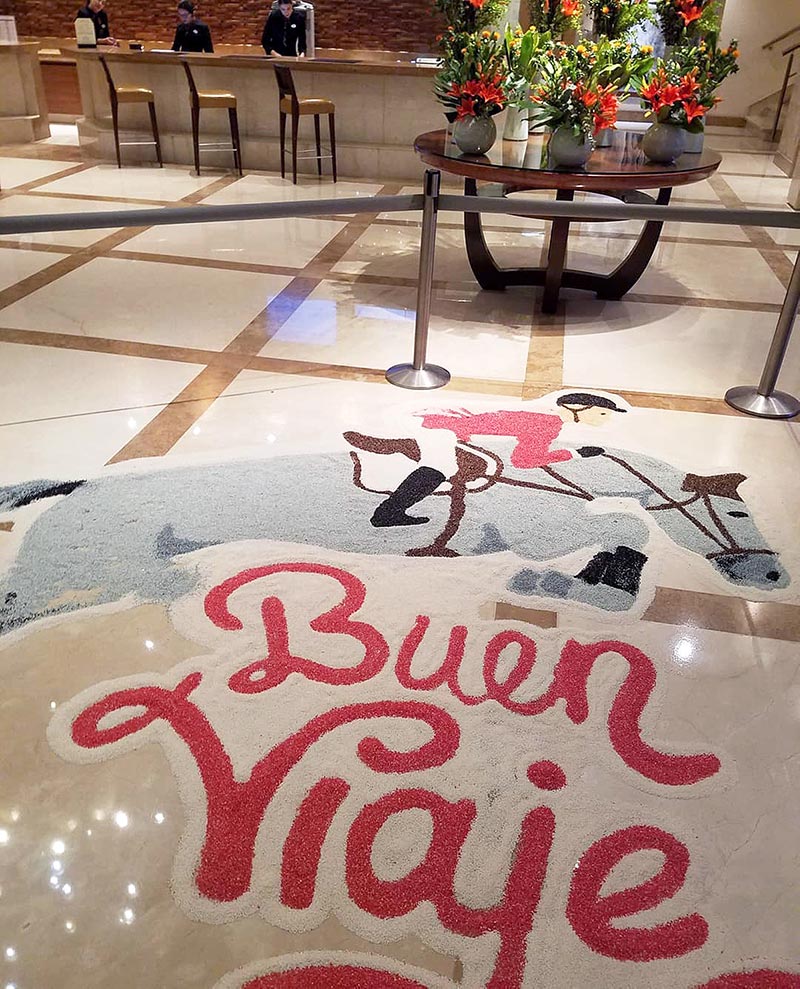 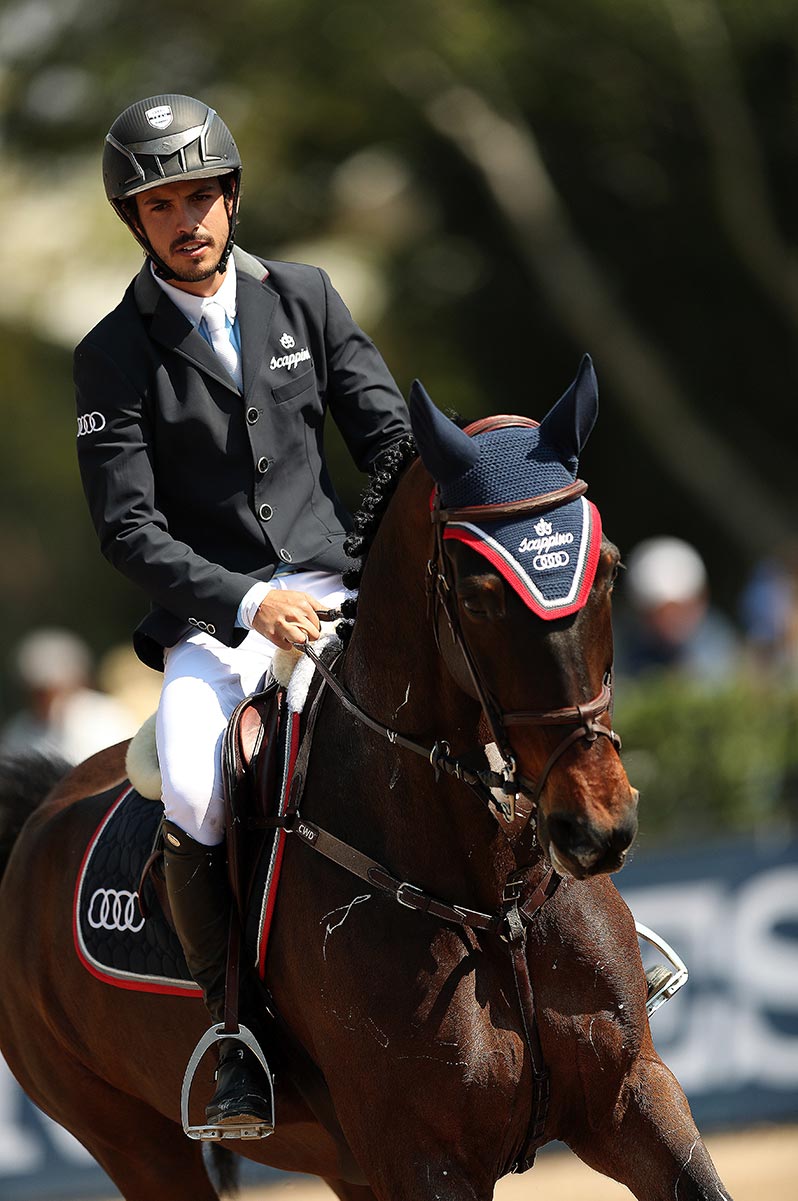 So my mom and I began our trek to the horse show. During the walk, I made sure to wear my backpack on the front of me to prevent pick-pocketing, walked as fast as my legs could carry me, and I checked over my shoulders every few steps to make sure I was still safe. After a short fifteen minute walk that was surprisingly safe and simple, we met Jackie at the entrance. After passing through the guard gate, we were pleasantly surprised by the beautiful scenery, outstanding horses, large arena, lovely VIP area, fantastic food, and friendly people. The Mexico that I arrived in was nothing like the Mexico that I saw on the news and in my imagination.

I spent my four day stay in Guadalajara watching athletic horses jump magnificent courses at the Guadalajara Country Club; walking miles and miles along the streets in search for historical sights and landmarks, such as the government building, the San Pedro Apostle Church, and the entryway to the city; and was completely immersed in the culture that surrounded me. When Saturday rolled around, I was disappointed that we had booked a flight back for that night, thinking we would be anxious to be back home. 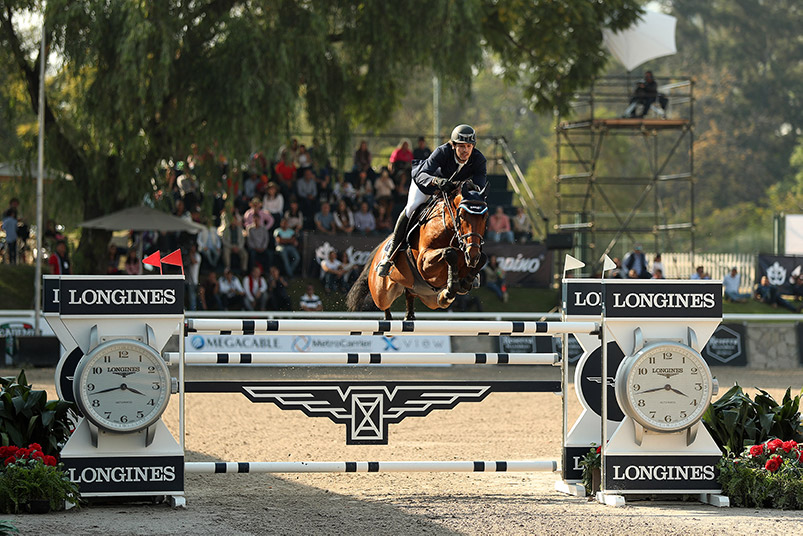 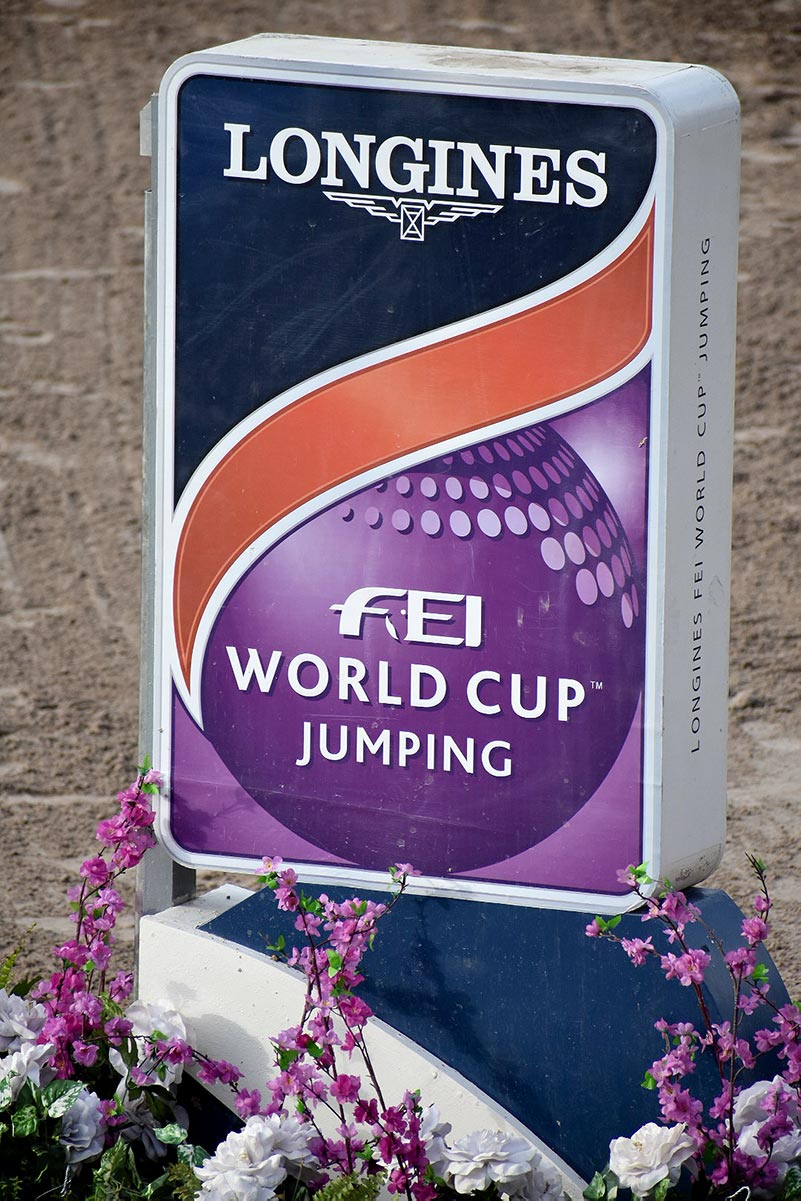 Needless to say, I was shocked at the transformation I underwent during the short time I spent in Guadalajara. Up until getting on the airplane to go to the horse show, I still didn’t understand why I had agreed to go on the trip, what I was thinking, or what I would face when I got off the airplane. Once I got to Guadalajara, however, I realized that the Mexico that is portrayed on the television and in my imagination was nothing like the Guadalajara that I was visiting. This Guadalajara was happy, bright, and absolutely gorgeous. We thoroughly enjoyed the ideal weather, the very reasonably priced restaurants and shops, and the boutique, non-bustling show scene.

I now have the Triple Copa Scappino marked on my 2019 calendar, and I sincerely look forward to attending the horse show again not only as press, but as a competitor as well. I was excited to learn that I can plan on a circuit of FEI shows there if I choose, in places I hear are also worth a visit, including Valle de Bravo, San Miguel Allende, Balvanera and Xalapa. Spend winter south of the border? Sounds like a great idea to me! 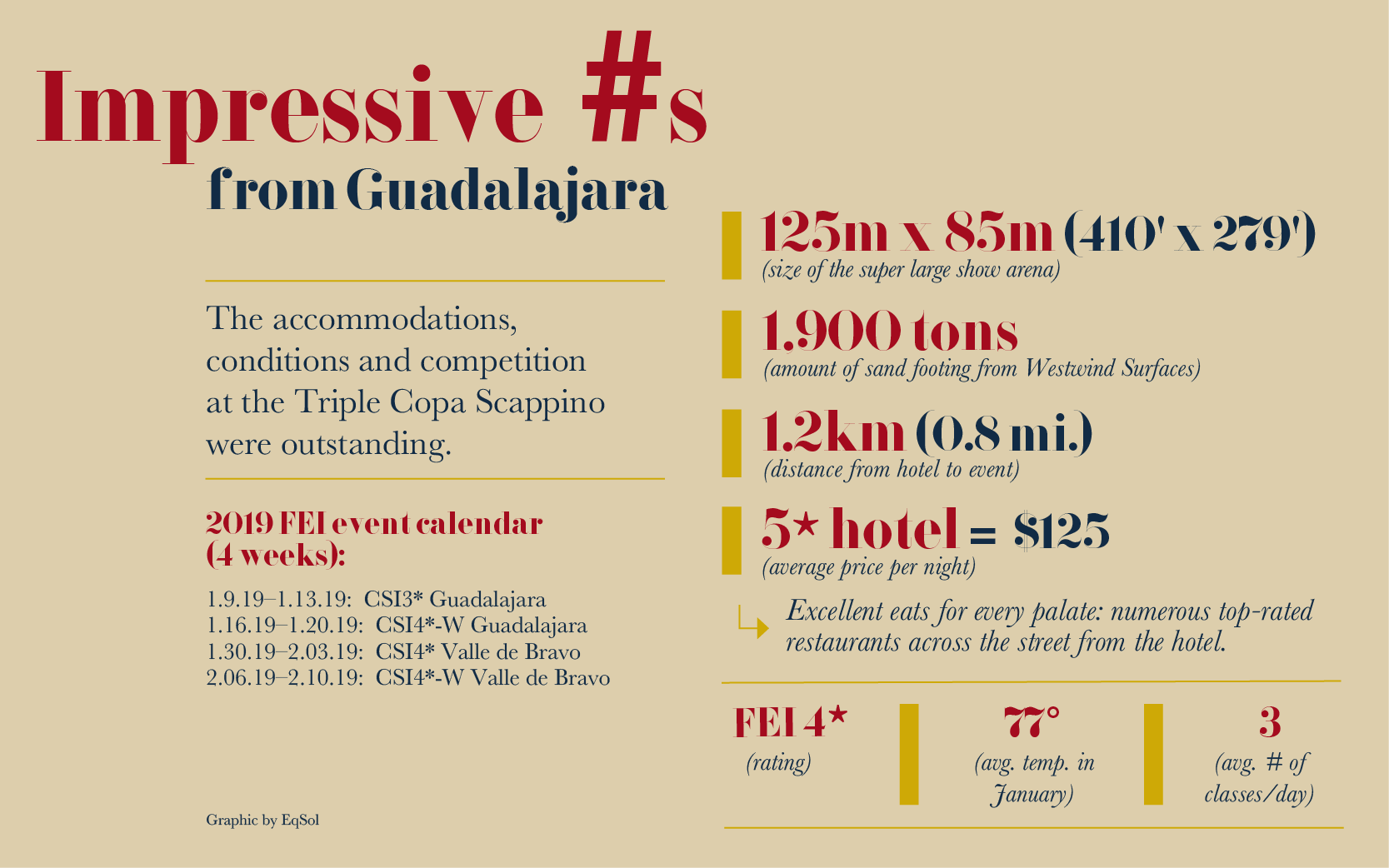 Impressive #s from Guadalajara; graphic by EqSol.
Click to enlarge.