The Tour and the League Began in Miami & Mexico

This story was originally written for and published by the Horse & Style Magazine in their May/June ’16 issue. Learn more at horseandstylemag.com 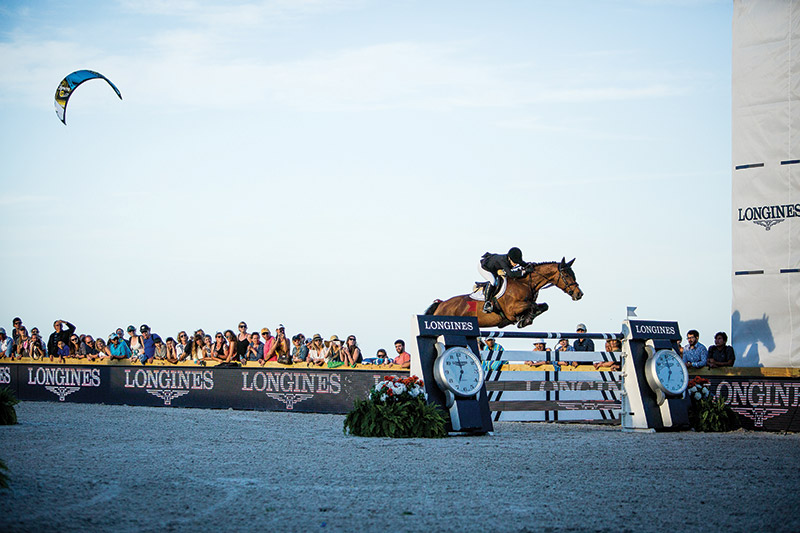 After more than a decade, the Longines Global Champions Tour is in a league of its own. There is no other offering in the sport of show jumping produced in this manner; up to 50 world-ranked athletes and their horses compete in five-star events in 15 beautiful locations around the world, for significant purses totaling approximately €9 million ($10 million) annually, including a year-end Champion of Champions bonus.

The Champion of Champions of the LGCT rewards the rider who, in that particular year (and in the case of Edwina Tops-Alexander and Scott Brash two years), had their ‘game on,’ proving at the end of a season they were truly the most consistent prize winner on the Tour.

As expansive as the LCGT is, it actually brings the world of show jumping closer to the fans. Many of the riders unite in up to fifteen competitions, in locations that transform for the sake of show jumping, in twelve countries around the globe. And now for the first time, two of the fifteen weekends were in North America.

Miami Beach and Mexico City hosted the inaugural events of the 2016 LCGT season, and impressively so. Miami Beach sparkled for the second year in a row. Intimate and on the beach, one side of the small show arena is lined with beach-clad spectators. The grandstands and VIP areas are also filled with Floridians who love the sport, love the shore, or both. As can be expected when top athletes gather to compete, the Grand Prix of Miami Beach finished with a nail-biting jump-off, where last-to-go Edwina Tops-Alexander (AUS) beat McLain Ward (USA) by a fraction of a second. 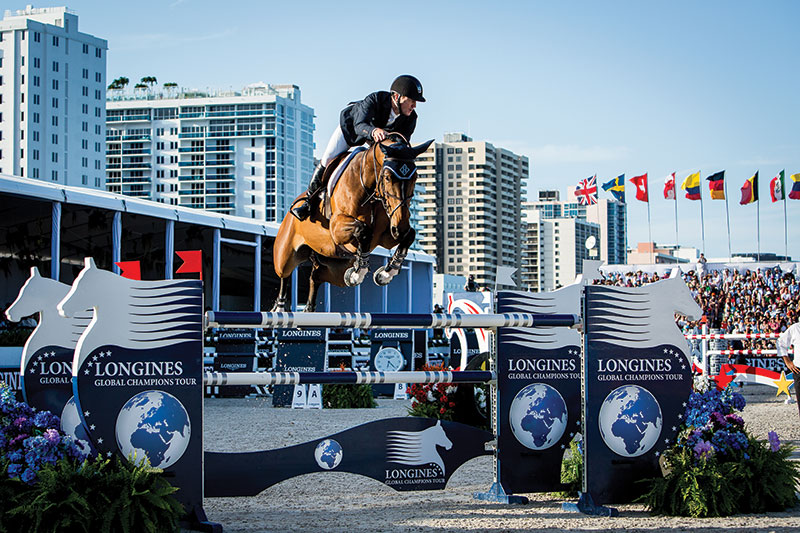 “[It was an] amazing start… I think all the circumstances are great. We present a unique sport that’s totally different than it is in our classical arenas, which is what makes it so unique for this show. This is what the Tour is about. We are very diverse,” explained Jan Tops, Longines Global Champions Tour Founder and President, while in Miami at the tour’s first leg. “This week we have a small arena but you also see big horses, like the ones McLain or Christian have, perform well in these arenas. Next week we have a big grass arena. We are jumping during the day and during the night – we have all these different elements and that is why I think the Tour is so special.”

McLain Ward (USA), silver medallist at the LGCT Grand Prix of Miami Beach stated, “I’d like to first say thank you to Jan and GCT – it’s great to have these events in North America; to bring up our sport to the level of Europe. For the top riders in our country it’s very exciting, so thank you… I’m proud of my horse, and my team – now on to the next.”

Staying in North America, the tour headed to Mexico City for the first time in its history. A bold move for all involved that took years of planning and months of preparation, the inaugural event unfolded in the center of a bustling metropolis of almost 9 million residents. In Mexico City the ideal site, the one used for the individual dressage and show jumping events for the 1968 Olympic Games, and for the 2008 World Polo Championship, is Campo Marte. With Los Pinos, the home and office of the President, only a half mile away, the field is most often used as a landing pad for helicopters with political leaders on board. It has been eight years since the prime location was made available for a major event, but the Tour’s partners Promo Mexico and Oxer Sport made it happen. 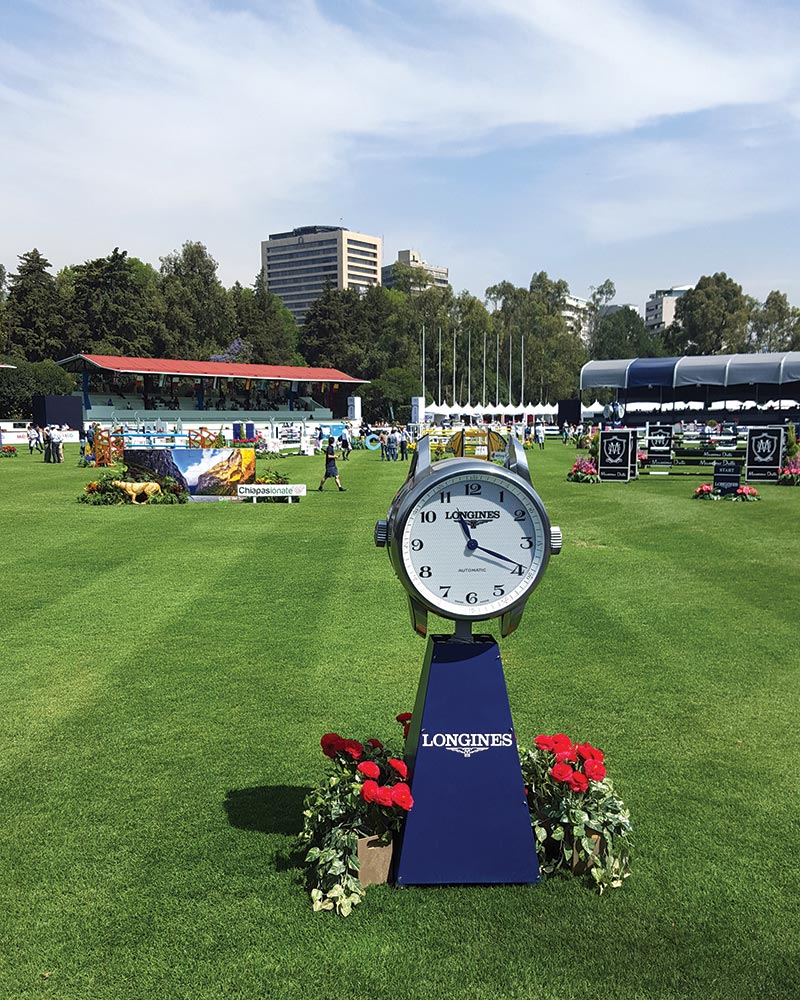 A pristine grass field in the center of Mexico City set the stage for the second leg of the Longines Global Champions Tour, photo © EqSol

In contrast to the compact sand arena next to the Atlantic Ocean shoreline in Miami Beach, the big, sweeping grass arena at Campo Marte spans 125m x 75m (410’ x 246’). The high octane sport also occurred in high altitude with the venue at 2,250 meters (7,382’ or 1.4 miles) above sea level, which didn’t appear to affect the equine or equestrian athletes at all.

Securing the ideal stage is only the beginning in producing an event of this magnitude. Along with making certain every need for the horses and riders was handled properly, preparing the grass for heavy use, and then dressing up the otherwise ‘empty space’ with a four-tier catered VIP for 200 tables, sponsor seating, shopping, media center, and more, the end goal was to bring the world’s best show jumpers to Mexico City and to draw a large audience who would appreciate this magnificent sport.

With a two-round grand prix format and a jump-off of four on Saturday, the talent did not disappoint. Thousands of cheering spectators, eager for autographs when the opportunity arose, filled the VIP, the grandstands, and packed the fence line of the large arena. French veteran Roger-Yves Bost (better known as Bosty) set a standard that could not be topped by current Tour Leader Christian Ahlmann (GER), nor young hotshots Bertram Allen (IRL) and Jos Verlooy (BEL) to lead the victory gallop for this historic event. 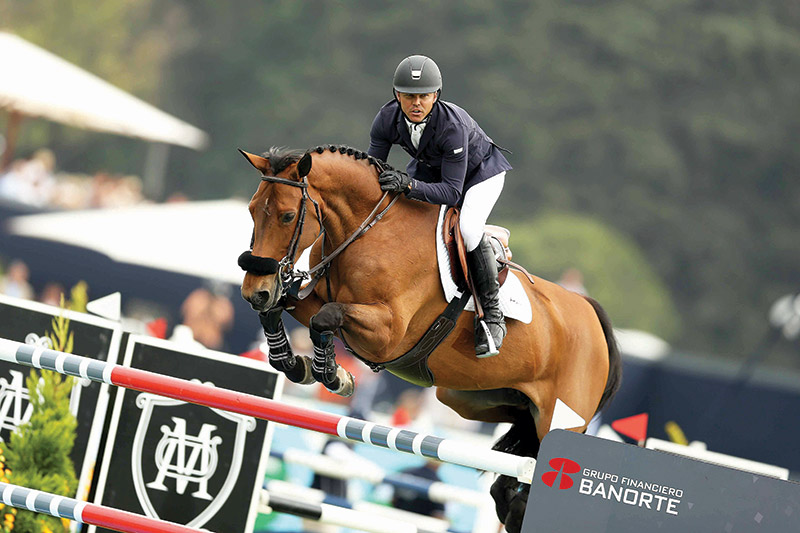 In attendance at the press conference after the inaugural LGCT Grand Prix of Mexico City, Álvaro Arrieta Konyay, Oxer Sport CEO, was ecstatic. “This is like a dream! Here there are four of the best riders in the world, and here we are in Mexico. We started working two years ago – thanks to the confidence and the trust of my friend Jan. The team of my company, of Oxer Sport, the Pasquel family, all of us have done our best to get this amazing event. We have great pride in the excellent, excellent assistance of the public this Saturday – today we’ve seen fantastic sport here, thanks to the course designer (Uliano Vezzani) who is part of this magic moment. Thank you to Mexico, to the Secretary of Tourism, as well as the Director of Longines. In Mexico they have supported this fantastic Grand Prix. Thank you.”

Tops concurred. “If you’d wanted to write the perfect script a week ago, you would end up with what you are seeing here in the last couple of days. Not only was it perfect organization and with great riders, the public here were unique – they are very warm, they know about the sport, and they really appreciate the riders and the performance. This makes it a special place. I would like to thank Oxer and the Pasquel family, it was a great partnership. Also thanks to the Mexican Government who are behind us. Without these people we couldn’t have had a weekend like this. The winner was the sport – it was a great finish thanks to the course builder again, and I’d like to thank all the stakeholders who made this happen.” 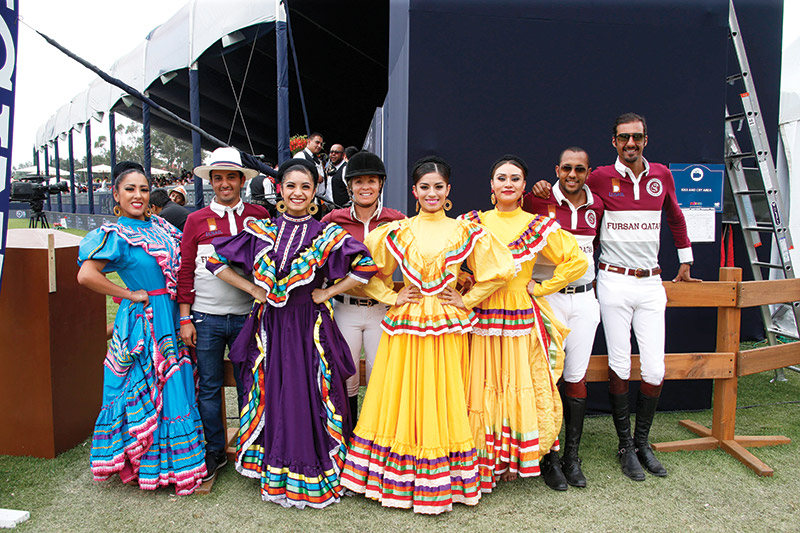 Knowing that creating a magnificent setting in a worldly location isn’t quite enough to generate the fanbase this sport deserves, Jan Tops and Frank McCourt have introduced a brand new concept to up the ante for all involved. The Global Champions League (GCL) kicked off this season, and North America had the honor of hosting the first two GCL events in history.

Dressed in team-colored polo shirts or jackets, two riders are picked to compete in Sunday’s GCL event each week. They compete in a rotation of two rounds against the clock with a maximum obstacle height of 1.50–1.55m. Riders must use the same horse in both rounds. A horse participating in the GCL competition is not allowed to participate in another competition on the same day.

Each GCL team enters into a franchise agreement for the full season – March through November – and is named for a location on the tour, with five athletes, including two top-thirty ranked riders and one U25 (under age 25) rider, plus a manager per team. Likely, none of these unique groupings has competed as teammates, only against one another, and that adds a unique aspect never seen before. 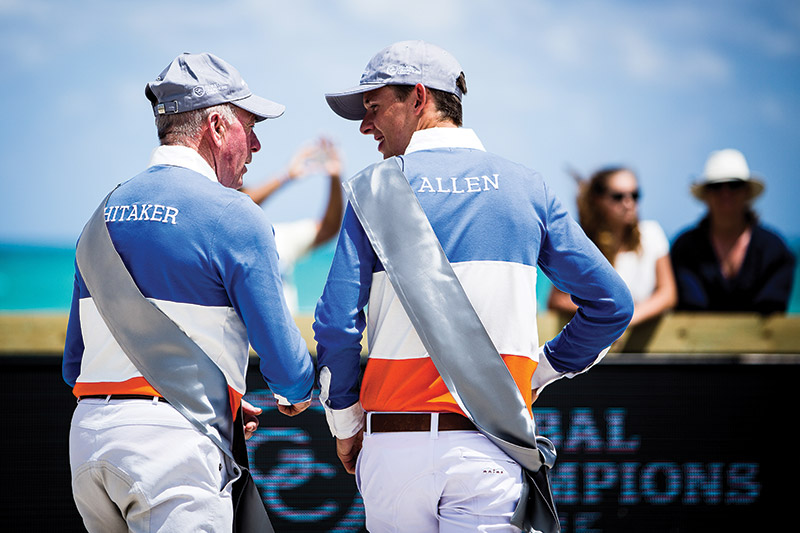 Kicking off the first-ever event in Miami, Team Valkenswaard United earned the best score, with world-ranked U25 rider Bertram Allen and world-ranked veteran John Whitaker competing as teammates. They scored a total of 4 faults in four rounds, each riding twice, in a total time of 113.15, and were followed closely by the Antwerp Diamonds, represented by Audrey Coulter and Jos Verlooy, also with a total of 4 faults, in a time of 118.59. Coulter and Verlooy are barn mates, but in the GCL they ride as teammates.

Two tough yet graceful Shanghai Swans stepped up for the win over a challenging track in Mexico. Teammates Edwina Tops-Alexander and Janne Friederike-Meyer scored 10 faults with the next best score at 15 faults.

Vincent Caumartin, Shanghai Swans Team Manager, took the time to talk a bit about the new league. “Jan Tops understands what showjumping needs. He has a vision of this sport. He really knows horses and riders and how to put show jumping ‘under the lights.’ I think this sport has beautiful years ahead.” 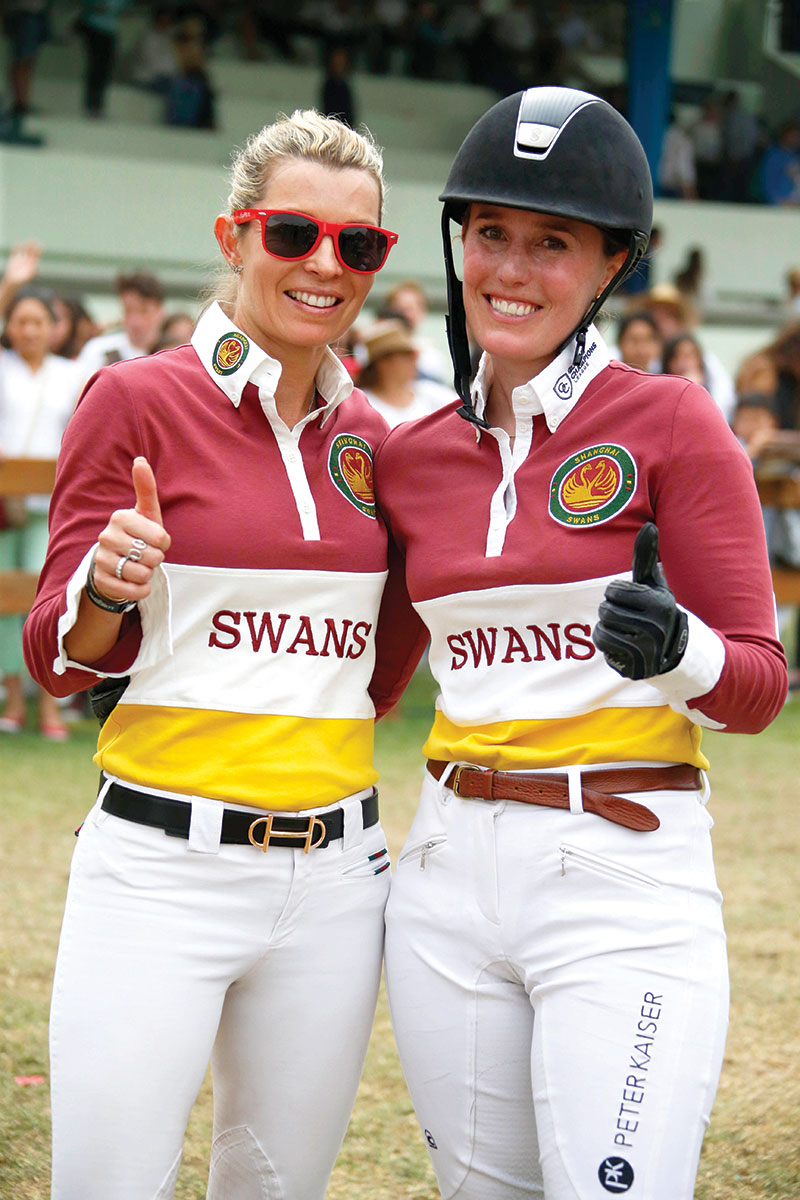 He went on to explain the energy of the Sunday event. “It’s a new concept. People want entertainment and to understand the rules. There is music and excitement in a short format,” Caumartin said. “In Mexico the public was fantastic. It was crowded with an incredible atmosphere. They were behind the riders, supporting them on the League. You have to live for moments like that!” 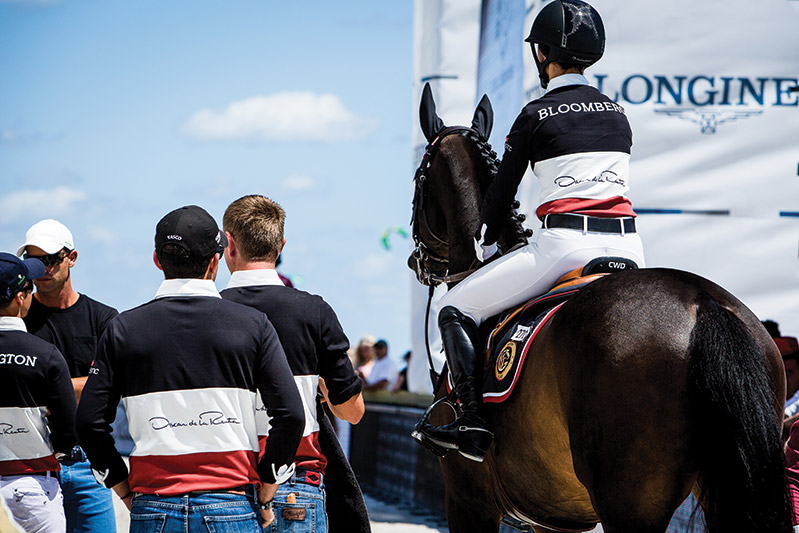 With team tactics and the potential to trade team members, this is truly only the beginning of a bigger vision developed by GCL Co-Founders Jan Tops and Frank McCourt. They predict the new team competitions will transform show jumping and evolve the sport for the modern era, benefiting fans, sponsors, media and team owners. Breaking the barrier in a traditional sport is bound to raise some questions and a touch of controversy, nothing new to Tops and McCourt.They plan to stay the course and see their vision become the fanbase solution the sport so sorely needs.

Still significantly European, with a few other continents sprinkled in, the Longines Global Champions Tour and the Global Champions League now bring the best in show jumping to North America. With this comes the amazing LGCT and GCL behind-the-scenes, and in front of the camera, teams who bring the sport to the fans in-house and beyond. From social media to web to TV, they work tirelessly to bring show jumping to the audience in every medium. At press time, the Tour had been to Antwerp, Belgium, and is now settling into Shanghai, China. There is no reason not to ‘go global’ – top sport presented by true global champions is at your fingertips.